Normally the Canon 5D has a max sync speed of 1/200 of a second, rather than the more usual 1/250, since it has a full frame sensor. When using the RF-602s, the max sync speed is reduced to 1/160 of a second. These numbers may vary depending on your equipment.

As a general rule I would recommend to test this before you go out shooting. Especially if you’re using a new camera, a new set of receivers or flashes.

Connecting the Receiver to the Flash Using a Cable

While the RF-602s works more or less flawlessly when the flash is connected using the hot-shoe on the receiver, using a cable (as shown in the image), may result in some strange behavior. In my case, for example, the receiver will no longer be able to wake up the flash from sleep. I’ve tested this on both my Canon Speedlite 580EX II with the same result. 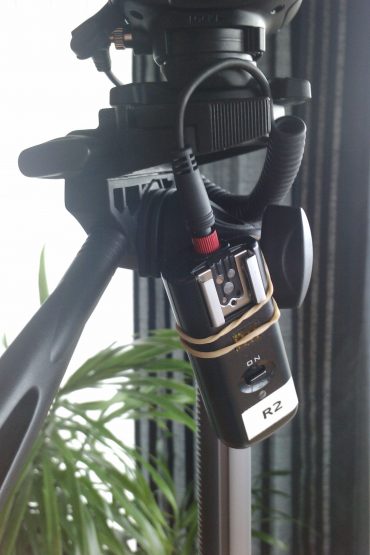 This can be solved by disabling the sleep function on the flash unit.

Securing the Receiver on a Flash Stand

Based on what I’ve written above, you might wonder why I don’t simply use the hot-shoe on the receiver instead of the cable.

However, if you use a screw (like the one used when connection your camera to a tripod) instead of a hot-shoe mount, this shouldn’t be a problem. The important part is to make sure your flash is secure. Do not compromise.